Gaudon said winning the grand prize would allow her company, which makes bison-based Tanka bars, to better support bison suppliers because she wouldn’t have to pay for a booth next year.

“What is Tanka? In Lakota it means larger than life. Huge, mammoth, powerful. Everything about the buffalo encompasses. Naturally we believe and live life powerfully accordingly,” Gaudon told the beginning of his presentation. Native American Natural Foods plans to expand to include other tribes whose diets may depend on protein other than buffalo, he said. 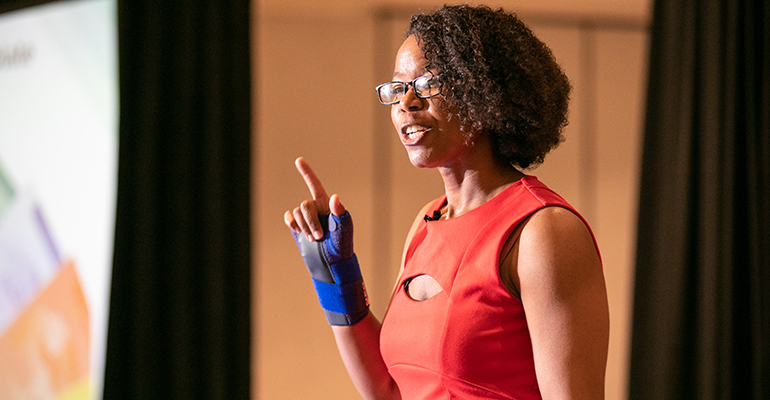 Thereasa Black opened her speech with a shocking statement: “The unthinkable has happened. Chocolate lovers around the world have cut back and even given up on chocolate.” The reasons? Sugar, sugar alcohol, dairy products, unhealthy ingredients, slavery and GMOs.

“Do not be afraid!” she continued. “Good AppeSweet is here!”

Black founded Bon AppeSweet chocolates — a sugar-free, dairy-free, and non-GMO brand — to fulfill a promise he made to his daughter: that she would never be deployed again. Black, who was deployed for 13 months from her daughter’s age of 2, includes this promise on the labels of her chocolate bars.

The Navy veteran got a bit choked up when the Pitch Slam judge asked him what his favorite part of his day was picking up his daughter from school.

“She doesn’t say that now; she just comes up to me and gives me a huge hug. It makes my heart flutter every day.”